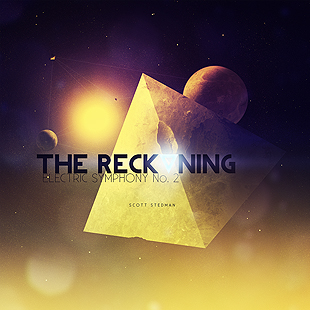 Shown here is the first movement of a three-movement work.

A somewhat large project accomplished entirely on a laptop for The Luminarium’s latest exhibit, Elements. At any rate, this is now the second electric symphony; an electroacoustic combination of orchestral and synthetic instruments in three movements.

The three movements are titled, pretentiously enough, after a sort of “guideline story” that I had in mind while writing. The Reckoning is a programmatic symphony that follows the story of a dystopian society in a post-apocalyptic Earth, ruled by a corrupted government and ultimately toppled by the actions of one boy who inadvertently exposes the actions of higher powers. At least, that was the idea I had in mind. The purpose was to write music that would sort of “fill in” the story in the mind of each individual listener. Hope it works for you.